HUT Challenges are brand new to this EA Sports series for NHL 18 and I’ll be honest, I didn’t really expect to be writing a post on them at all because I’m not usually an offline mode kinda guy, but here we are…

The rewards for a lot of the challenges make them worth doing, especially if you are a free to play HUT player. The more the merrier when it comes to free HUT pack opportunities.

Aside from the rewards, the part that hooked me was some of them are actually a challenge too. Gives that feeling of accomplishment when you finally manage to finish a challenge you’re struggling with.

If you find this post helpful then let me know in the comments or on Twitter @ChelTips and I’ll do more for the other challenge series.

For those who haven’t done any challenges yet I just want to quickly explain what the 3-Star Challenges are all about. 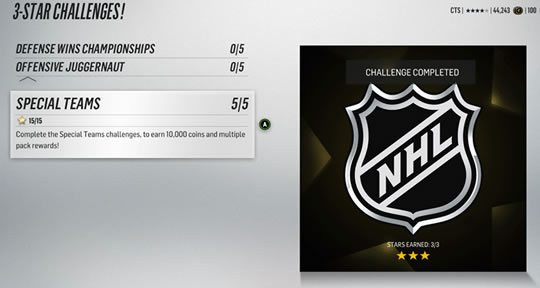 There are 3 different sets:

Each set has 5 different challenge subsets that are made up of 3 challenges to complete during a game. Each challenge you complete will give you a star and the corresponding reward for that number of stars.

IMPORTANT: You do NOT need to earn all 3 stars in the same game. The challenges you complete carry over, so you can focus on one challenge at a time. If you don’t make it through all 3 in the same game then just re-play it to complete the remaining challenges and earn 3/3 stars.

“Defense Wins Championships” and “Offensive Juggernaut” give bronze and silver packs as the best rewards while “Special Teams” offers gold packs and even a rare players pack. So, of course, we are going straight to the Special Teams challenges.

See the specific rewards in the screenshots under each challenge below.

Difficulty level is only Pro so AI won’t be that great yet.

The hardest challenge in the Special Teams set might be the fact you have to draw a penalty against the AI.

For all the flack the community gives the AI, they are extremely disciplined when it comes to penalties.

The best way I found to draw a penalty is to rag the puck… The one time in this game you can puck rag and I won’t immediately hate you.

As you can see in the video, it’s best to do it in the neutral zone as you have more space and won’t be attacked by other AI.

And while it looks easy enough based on that video, what you don’t see is the rest of the game where I spent doing that exact same thing… no joke. It might take some patience. In other games, I managed to draw one at the beginning so it’s a bit of a coin flip when it will happen, just know that they WILL eventually take one.

Surprisingly enough this one took me the longest to complete out of the 3 for this challenge set. I figured it would be easy, but keep in mind you only have three 2-minute periods. The AI can be quite good at keeping possession and killing a lot of that time.

I suggest changing your offensive line strategy to “crash the net” to get more bodies in front for rebounds. Then just shoot every chance you get.

Press “B” to bring that menu up and then cycle through the line strategies by pressing RB. Check out our Coaching Strategy post for explanations on all line strategies.

Nothing to add here. Score 3 more goals than your opponent.

Easiest way to take a penalty is to just skate back into your own zone and shoot the puck out of play.

I suggest having your offensive strategies on the aggressive side if you want to get a shorthanded goal.

Change your Quick Breakout to “Leave Zone Early” and turn your breakout aggressiveness to “Aggressive” or “Full Attack”. The more aggressive your breakout the more support you will have up the ice with you. Of course, that is a risk – don’t turn over the puck in the neutral zone!

For your penalty kill line strategy, I would suggest “Large Box”. It’s more aggressive so you should be able to check the AI quicker then transition into a quick breakout.

Dump the puck into the corners so you can chase the AI in for a hit or just give the opposing AI the puck so they can try and break into your zone – stand them up at the blueline.

Have 1 minutes of time on attack

This means you need to have possession of the puck for a total of 60 seconds in the offensive zone(neutral zone doesn’t count). HUT challenge games are a total of 6 minutes so you have plenty of time; however, the AI defense can be frustratingly good at checking you and wasting precious time.

If you’re struggling with this, get the puck in the offensive zone then pass it back to one of your defensemen and pass back and forth between them until you’ve reached 60 seconds. Watch video below for illustration.

Your AI will probably do this one without you even realizing it happened. If you do have trouble getting it then turn your defensive pressure to “Protect The Net”, that should give the AI more space to take shots and your players will clog up the front of the net for higher chance of a block.

Keep in mind that you don’t need to finish all these in the same game. If they score a powerplay goal on you then you can still keep playing for 100% PP and the win. That way in your second try you will only need to focus on the penalty kill.

Not much to add here… score more goals than your opponent.

Penalty kill percentage of at least 100%

Finishing the game without any penalties doesn’t count as 100% PK so you need to take at least one penalty and kill it successfully. I’d suggest doing this one first as it’s easy to flip the puck out of play at the beginning of the game and then once you kill off that penalty you can focus the rest of the game on the other two challenges.

Powerplay percentage of at least 100%

Last one! Same as just scoring a powerplay goal but try not to draw another penalty afterward. Of course, make sure you get the win too.

Good luck with the packs. I wish you all a 92 Bure.