Hey everyone, you may or may not have been following the Stanley HUT tournament that myself and 15 other NHL 17 content creators(YouTubers, Streamers, etc.) took part in.

You can read all about it and view the bracket at the link above if you’re interested. Thanks to BOJoeKO for organizing the event and big congrats to Brianstormed who won the tournament by sweeping both the semi-finals and finals! No big deal I guess eh?

Part of the tournament involved creating an “All time” team for whichever playoff team you were assigned and since the tournament is now over I don’t need the team anymore so why not give it away? I was randomly assigned Toronto Maple Leafs – you can view my team on HUTDB. Several of my players were untradeable, but I’m giving away ALL of the tradeable players.

Unfortunately, the TOTY Nylander wasn’t tradeable but I do have a World Championship 87 Nylander that I’ve thrown in.

I’ve split it up into three different prize packages since there are quite a few cards. In order of current estimated value:

There are TWO ways to enter!

2. Put up ONE Gold contract in the Xbox Auction House with a Buy Now of 151515 and duration 3 days – as seen in screenshot: 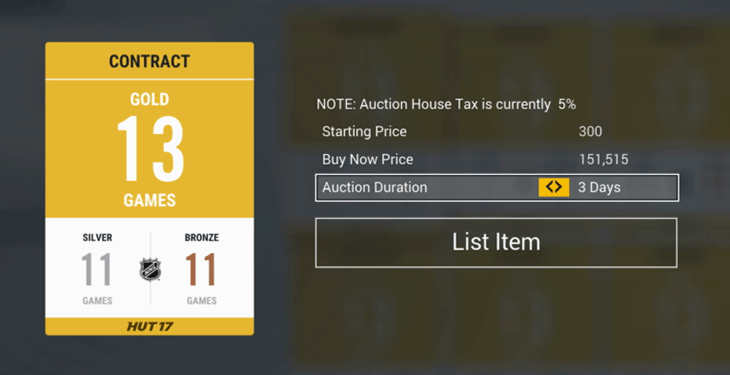 It is possible for one person to win 2 of 3 prizes so make sure to enter both methods! Good luck.

Both Twitter winners will be drawn on Friday June 2nd – that will be for the first and second package.

Third prize has been sent!(along with a few smaller consolation prizes) If you won, congrats! If you didn’t, good luck in the twitter draw on Friday.

**Giveaway is for Xbox players only

1 contract per person for entry method #2.